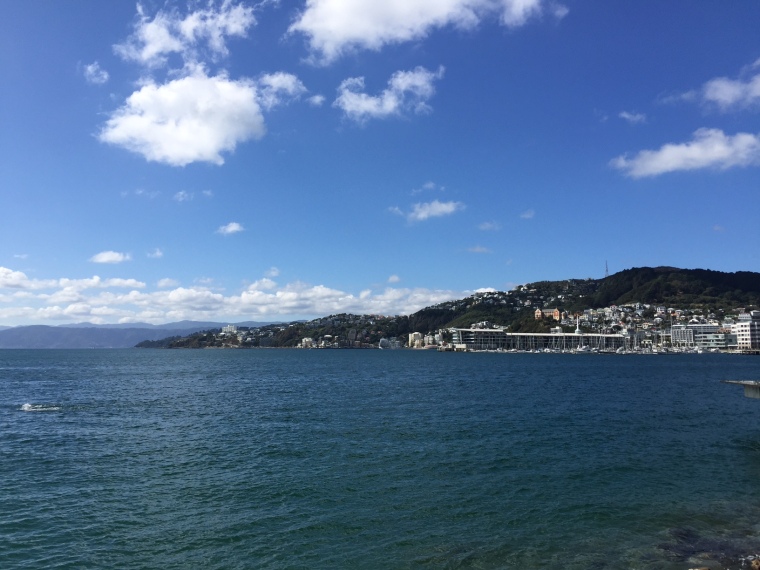 Upon entry into New Zealand, you are greeted with “Kia Ora”, the Maori word for “hello” “welcome” and “thank you”. It is a word that embodies the spirit of this country – the openness toward visitors and the integration among the people here.

After clearing customs at Auckland airport, we were given the option to walk or take a shuttle to the domestic terminal to make our connection to Wellington. The light of early morning and fresh air beckoned, so we strapped on our packs and followed a clearly marked walking path designated by an unmistakable green line. The green line led us through several crosswalks where the most important thing to remember for bleary-eyed travellers was “look right!” since small trucks and utility vehicles were busy making their usual morning deliveries, but driving on the left side of the road.

We passed several unmarked buildings and walked through parking lots lined with high fences. About 12 minutes later, feeling a tad refreshed having watched the sun begin to rise over the 1960’s style air traffic control tower, we reached the terminal. An outdoor pedestrian path between airport terminals struck me as an innovative and cost-effective way to move people (bucket of green paint and some fencing, anyone?). I couldn’t imagine doing such a thing at a US airport.

Have you ever had an experience where you found yourself “bridging” places?

By that I mean leaving one place, going somewhere entirely different and then encountering a strong physical reminder of the place you left. To me, it feels like a bridge. The place you left says “goodbye” and “don’t forget about me!” from one side but you’re still close enough to hear it on the far side of the bridge.

We had about an hour to burn before our next flight, so we settled in at a table at a café in the main terminal.   At the counter, I ordered two “flat whites” – a cross between a latte and a cappuccino (never mind what a certain global coffee company thinks it is).  As far as I’m concerned, it’s the way you start a day in New Zealand.

There were two televisions on over the bar in the café, and from what I could hear two commenters were covering the daily sports roundup. I glanced up for a moment to see a person, completely vertically inverted, hurling oneself through the air feet first with a pole vault. The athlete cleared the jump and landed safely on a bright orange mat that read, “Portland 2016.”

When we left home, Portland was in the midst of hosting the World Indoor Track and Field Championships, a high-profile international event that welcomed 500 athletes from around the world to compete against one another for prestigious titles. Welcoming visiting dignitaries to Portland had been one of my “to do’s” my last week at work and many of my colleagues have been immersed for the better part of a year making preparations for the events. But it was certainly not what I expected to see in my first glimpse at a television at the Auckland airport. It took substantial restraint not to immediately e-mail and text colleagues back home. Instead, I took it as a bridge. Don’t worry Portland. I won’t forget about you, but thanks for saying goodbye.

The capital city of NZ is a city by the sea located at the South end of the North Island.   This metropolitan city of about 400,000 people is the political center of the country as well as home to several universities, including Victoria University of Wellington. According to a Mercer survey in 2014, Wellington was recognized for having the 12th best quality of living in the world.

The first time I’d heard the word “Wellington”, I was 19-years-old preparing to leave home for a month-long summer study in the rainforest of Costa Rica. I was an English and Philosophy major at the University of Illinois and managed to talk my way onto a field research trip of 20 undergraduate and graduate students from across the country studying anthropology and environmental deforestation. On the list of required supplies and gear was “a pair of Wellingtons” and I had not a clue what they were. In the days before Google or Siri, I went to the nearest source of random bits of information— my dad. He took me to an outdoor outfitters store to buy the tall rubber boots and some mosquito netting. Marching through muddy, newly created trails and making a daily river crossing, I was glad to have my Wellingtons. That month was transformed my life in a number of ways – most of which are stories for another time – but it was the first time in my life when I traveled and experienced a world vastly different from my own. In spite of the many physical and mental challenges of that trip, I was glad to have my Wellingtons.

From the airport, we took “Green Cabs” to our friend’s flat, overlooking the City and the bay on Salamanca Road. (Twenty-four years ago, Alisa spent a year studying abroad in Salamanca, Spain. Now that’s a long bridge.) 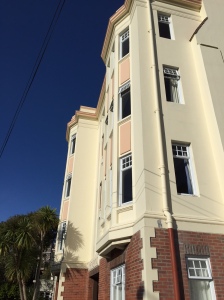 We showered, gleefully changed into clean clothes, and set out by foot to find lunch. We found a walking trail into town across the road that wound down paths and narrow residential streets, at times steeply taking us down toward downtown and the sea. Crossing over a major highway, the city began to resemble a cross between Seattle and San Francisco. The highway divided the residential colonial-style homes with high-rise downtown buildings, architectural throw-backs from the 1960s.

Our first destination was the “Old Bank Shopping Arcade”, a shopping mall with café’s and boutique shops, located in an aptly named turn-of-the-century bank. Our internal compasses prompted us to keep moving down to Wellington’s waterfront, a major feature of the city. At lunchtime, the waterfront was bustling with locals jogging alongside or swimming in the bay. A range of restaurants and take-out windows catered to tourists and local business people alike. 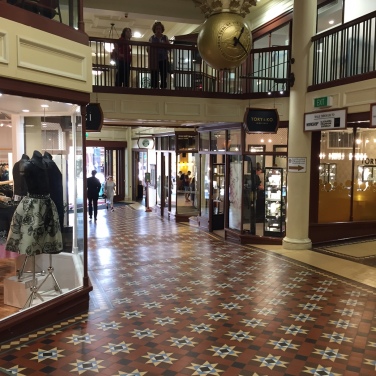 A stroll along the busy downtown streets followed lunch and we popped into a market for essential provisions, like eggs, veggies and wine, to sustain us for a few days in the city. But then vertical ascent back up to the flat with groceries left us winded and feeling well beyond our ages and out of shape. One thing we both know is 100 days from now, we hope to feel stronger and more fit, as we rely on our bodies for our primary source of daily transportation.

As a friend recently told us, “strong is the new skinny.”

A two-hour nap recharged my internal batteries and we made our way up the road about 20 minutes, past the university, to Kelburn Village – a charming village high above the sea surrounded with lush, tropical vegetation. We both enjoyed a beer on the terrace of the local village pub, listening to the buzzing pulse of the cicadas. Walking back down from the village after dinner, the light pinks and azure blues of sunset book-ended a gorgeous day, experienced in a state where jet-lagged delirium met wide-eyed curiosity. And so ended our first full day in Wellington.